Pearlgate Track & Field held their Annual Year End Awards on Oct. 19. The Twilight awards were handed out to the top 3 in each age category male & female. The Twilight Series is Pearlgate's own series of 8 meets where the athletes get to participate in events that they would normally compete in or try others that they have an interest in learning and they collect points for their finish. ( to win the awards they have to compete in at least 3 twilight meets ).

The winners were as follows:


The Club Awards are decided on by the coaching staff and were awarded as follow: 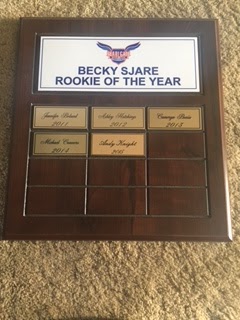 Our rookie of the year award was renamed this year in memory of the late Becky Sjare who passed away earlier this year. Becky was our head coach and had coached many Legion & Canada Games Teams. She was the type of coach who encouraged all athletes to strive for their best on and off the track and could always be found at meets watching the athletes and encouraging newcomers to try different disciplines to see which they would like. She was a positive influence on our beginners and senior athletes alike but she thrived in her discovery of the potential of new comers to the sport.

Our year end Potluck & Awards are an opportunity to celebrate the accomplishments of our athletes over the past season and also the chance to thank our volunteers, officials and parents for their continuous help & support. 2015 was a year of many personal bests and new provincial records. Our athletes competed in Montreal at the Hershey Indoor Championships, in PEI at Atlantic Championships, in Edmonton at Canadian Track & Field Championships, Harry Jerome International Track Classic in Vancouver, Victoria International Track Classic in Victoria, Royal Canadian Legion Youth Championships in Quebec as well as provincial and local meets.

The Penney Mazda Cape to Cabot Health Expo is open to all runners and the general public this Saturday, Oct.17 from 1 to 5 p.m. and Sunday, Oct. 18 from 10 a.m. to 12 noon at the Marine Institute, Ridge Road, St. John’s.

You can meet health professionals and sports vendors, and donate your gently used running shoes, and you won’t want to miss Terry Kelly’s talk at 2 p.m. There will also be a bouncy castle for the little ones.
Admission and parking is free.

The Penney Mazda Cape to Cabot is a race created by Athletics NorthEAST running club.